Ella Walklate, Reini Celmins, Alexander Vile and Adam Spreckley’s design, based on Glasgow's pigeon lofts, creates 10, single-occupancy SterlingOSB Zero frame structures on the banks of the Forth and Clyde Canal 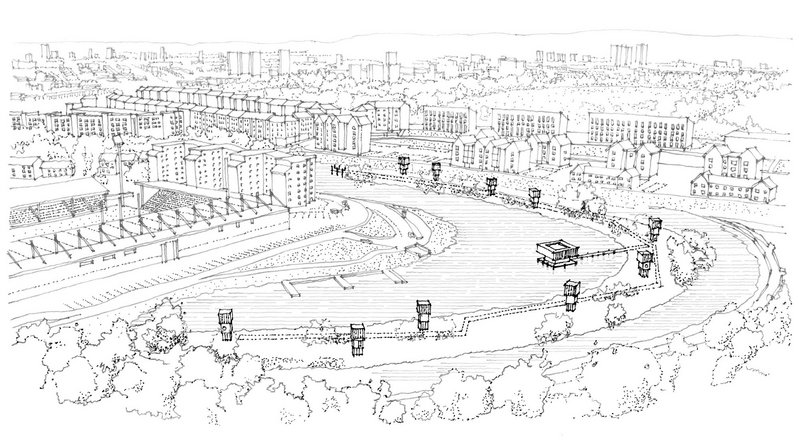 Judges enjoyed the scope of the Doocots entry, looking at the intervention even at city scale.

This proposal questions whether it is possible to ‘retreat’ in the centre of a city. Its site is on the Forth and Clyde Canal, 20 minutes north of Glasgow’s centre. ‘Well known to Glaswegians, “doocots” are private pigeon lofts, built on public land and usually found on the banks of the canal,’ the designers explain. These playful, informal structures are usually constructed from found materials and contribute to the architectural character of the canal.

The proposal involves 10, single-occupancy SterlingOSB Zero frame structures plus a communal building situated directly on the water for cooking and washing. The SterlingOSB Zero post and beam lattice structures, built economically using standard lengths of material, contain a step out at each level to give them a top-heavy, playful character, and are clad in zinc.

The SterlingOSB Zero posts are raised from the ground on rocks for weather protection. The basin is reached by a reinstated drawbridge, and the site is naturally separated from the city by the canal on all sides, like a moat providing residents with a degree of detachment from the city.

‘The proposed Doocots celebrate the life of the city with views of vibrant wildlife on the Forth and Clyde Canal, the ever-changing Scottish skies, and Partick Thistle Football Club,’ say the architects (though some of the judges were dubious about the location). Nevertheless, the research into local context and architectural styles impressed, with judge Debby Ray describing the proposal as ‘beautifully presented and creatively hijacking a quirky vernacular ... I like the idea that it is a bit DIY.’

This reflected Jan-Carlos Kucharek’s view: ‘Reifying the “doocot” up into a space for contemplation on a gritty canalside ... there is something beautiful about that.’