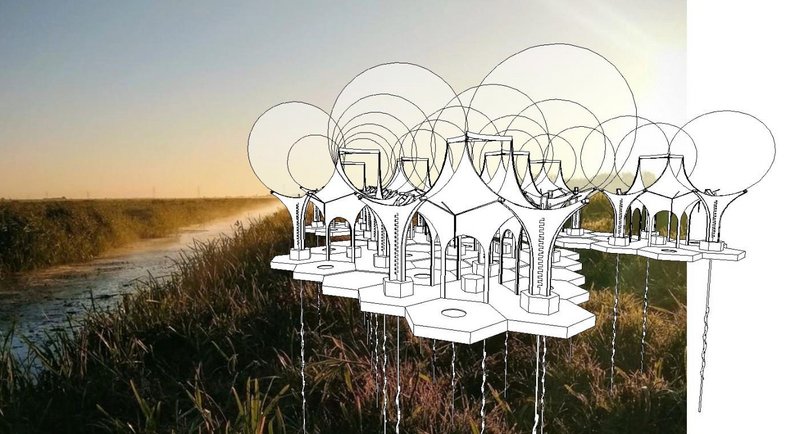 Like fen plant life turning to peat, the grotto’s distant but irrefutable failure is anticipated.

‘Wetlands, grottoes, rural remediation, extremophiles, methanogenesis, will-o’-the-wisp, flora, fauna, fungi, fenlands and the sublime. Retreat! Re-peat!’ Annable and Pickard’s unique and otherworldly design works with the end-of-life material properties of SterlingOSB Zero to give something back to a fenland environment and perhaps even reignite the ‘delusive light’ of a will-o’-the-wisp (Milton, Paradise Lost). Judge Kristofer Adelaide remarked that it was ‘the only entry that takes the idea of the material decomposing’, adding: ‘I’m impressed by the strength of its conceptual nature.

The retreat is a Vicnenzo Scamozzi-inspired shaded grotto-portico, with pools, niches and tableaus with statues. It is intended as a retreat for the flora and fauna of the fens, offering them a safe haven from the climate-based threats to their watery landscape.

Underpinning this fanciful vision is a serious look at environmental concerns and an effort to understand the science of material decay. ‘Studies have proposed ways to restore ecological diversity and abundance through rewetting and replanting,’ argue the designers, ‘however, wetlands’ natural production of methane ... could exacerbate climate change through “pollution swapping”.’

The project’s complexity of bulbous forms are positioned in a hexagonal formation across the landscape on cork matting with SterlingOSB Zero transferring the load through screw-pile anchor points. Above each cell, a balloon roof stores methane created by the single-celled organisms that thrive on decaying matter. This methane is used to feed various technologies elsewhere. Rainwater is channelled via stalactite formations into pools below.

‘Like fen plant life turning to peat through anaerobic conditions, the grotto’s eventual failure is anticipated. Sinking into the surface, consumed by flora and fungi as biogenic carbon storage, the process can begin again,’ explain the designers.

‘They have really tried to understand the organic systems and how the natural world and the SterlingOSB Zero comes together,’ said judge Debby Ray. Jan-Carlos Kucharek added: ‘They’re using OSB as a petri dish to allow other things to grow – a sacrificial decomposition. This entry excels, because it interrogates what it can be and how it relates to the natural world. It is poetic on the level of the picturesque, even sublime.’