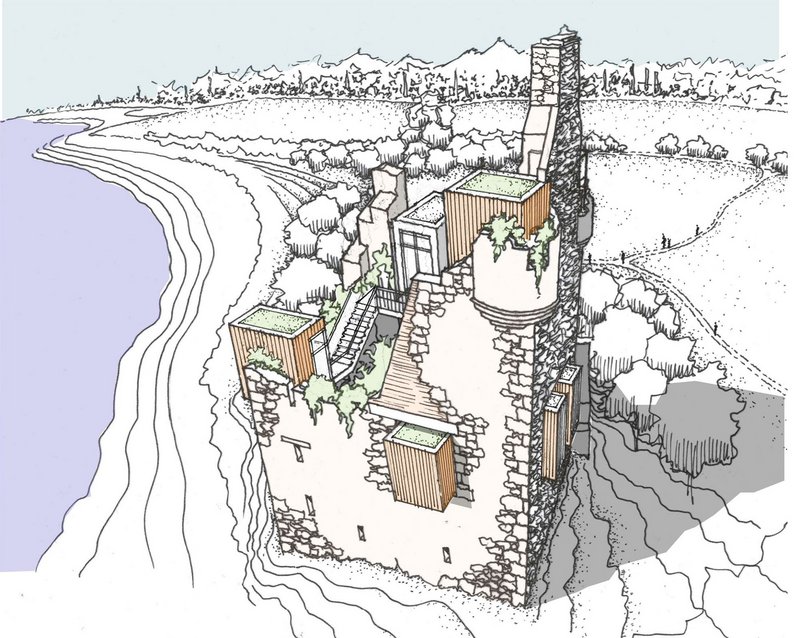 The strong presentation technique gave the judges a good feel for the project.

The Keep by David Russell Young and Henry Claymore Young

In a post-apocalyptic future, nine townsfolk retreat to Scotland’s west coast. There, within the walls of a historic keep, they encounter a series of modular SterlingOSB Zero structures dating from the historic year 2022, nestled amongst the corbelled turrets.

Young’s winning design embeds nine habitable lightweight cells into the stone fabric of a crumbling castle. Each cell is placed according to existing platforms and niches, accessed through reconstructed existing elements and a network of open timber steps, bridges and platforms.

As in Boccaccio’s Decameron, the players in this scenario are retreating from a hostile world to share their stories. Throughout its history, the castle has been both ‘a refuge and a defensible enclosure’, and the SterlingOSB Zero insertions resurrect the castle as not only a place of seclusion and security but also conviviality. ‘The built form is in one composed building, but you can encounter a lot of experiences in that one building,’ said judge Kristofer Adelaide.

The nine SterlingOSB Zero insertions require minimal modifications to the ruins. They are prefabricated from OSB SIPs and clad in larch. Inside they contain a workspace (where stories are composed in solitude), basic toilet provisions and a sleeping platform accessed by ladder. The spaces are consciously introverted.

At the base of the keep are communal gathering spaces, such as a refectory and kitchen, constructed on suspended CLT platforms and supported on screw-piles. These open onto an enclosed garden. ‘I like that there is a courtyard created by the ruin, and that they have not built into that void,’ said judge Timea Cooper.

‘I like that it is a retrofit,’ added fellow judge Debby Ray. ‘That it made use of found spaces is commendable in itself, but I also like that you can translate the concept to other crumbling old buildings.’ This was a view shared by all the judges. ‘This is my favourite,’ said Adelaide. ‘There is a realism to it that celebrates the material.’